It is the ability to reproduce images in memory (image thinking) and spatial representations, the ability to manipulate images, to understand the world mainly through image and visualization, good orientation in space. People with this type of intelligence dominating, are creative and imaginative, have a very well-developed imagination, often an artistic talent, easily orientate in a three-dimensional space. They skilfully use maps, diagrams and tables. They are interested in how different things work (they can unfold an object into pieces and easily fold it back). They have the ability to see the details of the surrounding world, they are sensitive to colours, shapes, lines, spaces. They have a well-developed sense of touch. They easily find their way in a new place. They like activities that allow them to manipulate; they are happy to draw, paint, sculpt, model, create multidimensional forms. Visual and spatial intelligence is the domain of people working as constructors, planners, designers, photographers, visual artists, graphic designers, engineers, surveyors, decorators. According to Gardner, this type of intelligence is the most underestimated in traditional schools.

If you are a person who is dominated by spatial intelligence, many of the following statements apply to you:

you are sensitive to shapes, lines, spaces, colours

you have a good image memory (when thinking, you often recall a picture to remember something)

you like to use a map, a plan, it does not cause you any difficulties

you like activities such as drawing, sculpting, cutting, modelling, creating spatial forms

you like to get to know something by touch, you can easily memorize using the sense of touch

you can easily find your way in a new place

you understand drawn diagrams, e.g. by reading the user manual of a new device, you are more likely to use such a scheme than from the description presented with words

you remember new content well if you can see an illustration, a photo or another message that uses your sense of sight 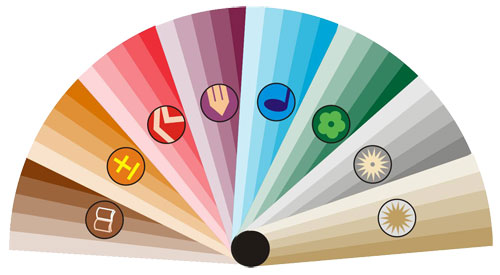